Does your family need to change the way it does chores? Mine did. When I applied my new method, and gave it a couple weeks, the results were amazing.

Last time I posted about chore charts, I had a weekly spreadsheet idea that worked well for our family at the time. Sometimes, even great ideas need to be changed around because people change and they like variety.

The first change that happened in my house is that we went from using the virtual school model to the Thomas Jefferson Education model (TJED). In TJED, one of the first phases families (not just the children) need to go through is the core phase, which includes learning how to keep the house clean and organized. This model also recommends deep cleaning the house a few times a year.

Before TJED, I had my kids do chores, but I did most of the them. This was a disservice to both of the children and myself because I would be wiped out and the adult-only responsibilities were not getting done. The children weren’t learning and the skills they needed to and they got to listen to me get upset when I tripped over the toys they left behind when they went from one activity to the next.

The kids even thought that they should only have to do their chore once per day. They complained when I asked them to empty or load the dishwasher more than once.  So the sink would end up full and rarely cleaned. The consequences: The table would be grimy from the last meal and dishes could be found scattered throughout the house. They ate from containers instead of bowls and plates. They didn’t like eating in these conditions and knew things had to change. 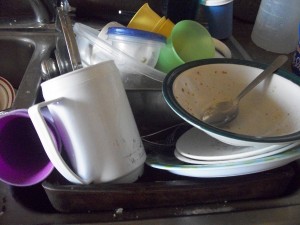 I talked with my sister-in-law, Connie. She told me she writes out a daily chore chart for her kids during the summer that the kids could check off as they go. I suggested this idea to my kids and I discovered that my kids liked it.

This summer, I decided to use a free spreadsheet program by OpenOffice.org or LibreOffice.org (each comes with a suite similar to Microsoft office for free). I gave each day it’s own sheet so that it would be easier to have my kids do similar chores certain days of the week (such as trash taken out on the day the garbage is picked up. This saved time so I wouldn’t have to rewrite or retype out the chart as often.

At first, I gave my kids only a few chores on the chart because the house was disorganized. I wanted to make sure that they had a chance to succeed, if they stayed on task, and did a thorough job. For instance, we worked as a team to deep clean each room- a different room or two each day- while maintaining the other rooms until we could get to them. This lasted about a week.

As we cleaned, I found out which rooms my kids were most interested in being in charge of each day. For instance, my 12 year old son wanted to labor in the garden, yard, chicken coop, etc. My 11 year old son wanted to be in charge of kitchen cleaning and cooking. I took that into consideration as I set their chores. They were able to focus their chores in those areas, but still did chores outside their comfort zone because they will one day leave the house and need to know how to do them.

About two weeks into using this new method, the list of their chores grew because each part of the house and yard was more organized and easier to maintain. I also added in taking time for reading as a family, free reading, writing in journal and some math (please note that we are having summer “break,” so schooling is not in full swing, and these activities are part of our routine year round).

Whenever there is change, even if everyone wants the change, someone is bound to resist it. Rules also work better if some of them come from under-management.

There came a point when I saw something that needed to be done that was not on the list. My 12 year old son pointed out that it wasn’t assigned to him. I explained to everyone that I  have the authority to assign anyone additional responsibilities as needs arise.

My kids decided to create additional house rules. For instance, they wanted to decrease the amount of cleaning that needed to be done, the children decided that everyone should remove their shoes when they entered the house. Their friends, the Bakers, who own the Homemaking Cottage Website, do work hard and have little shortcuts like taking off shoes at their house.

We also talked about steps they could take to make their work lighter each day. Such as picking up things as they see them while walking through the house, stopping little ones when they are in the process of making a mess, putting things away when they are done, etc. 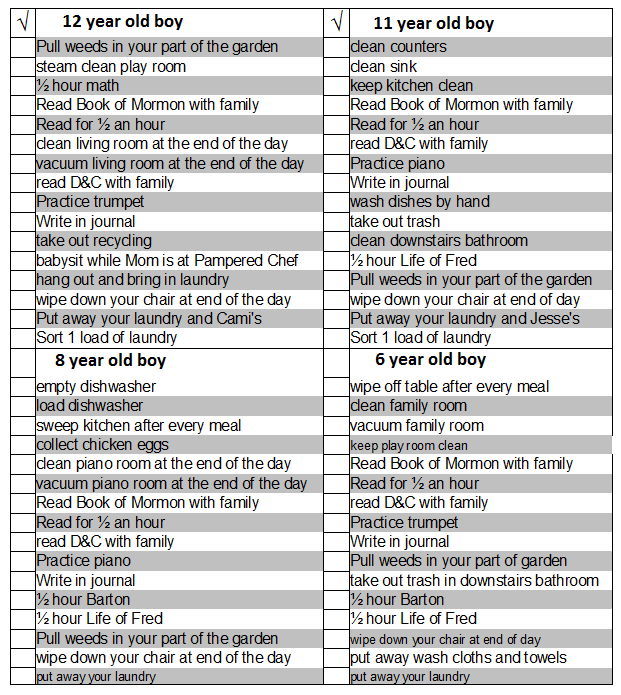 The obvious benefits: kids are learning a bunch of life skills and we have a clean house. The not so obvious benefit was that we were able to get rid of a bunch of things we no longer needed by donating useable items or throwing away broken items.

See how much we donated: 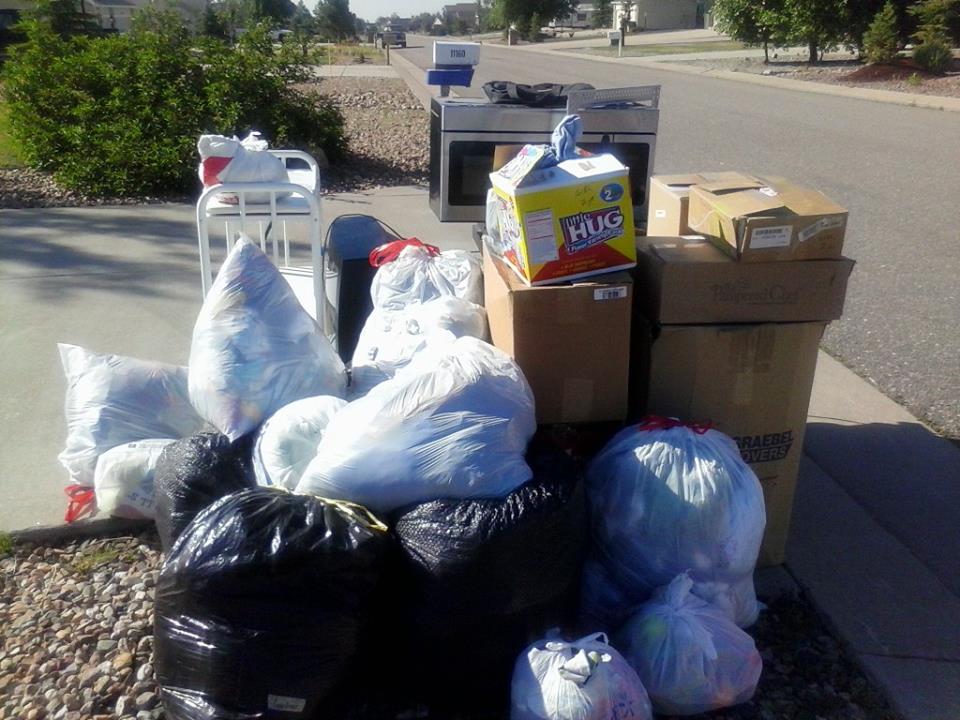 The number of complaints about doing chores actually decreased because the kids began to take pride in their accomplishments because they could be seen as we walked through the house as well as on their check off list. They no longer complained about doing chores more than once per day and they woke up excited to see which chores they got to do that day. The younger kids wanted to get their jobs done right away whereas the older kids wanted to do take their time to do their chores correctly.

What have you done that works for your family? What hasn’t worked? I’d love to hear your thoughts.