This page may contain affiliate links designed to provide a means for sites to earn advertising fees by advertising and linking to other companies. Those fees help keep this site running.

Thanks to the suggestion of one of this blog’s readers, my 9 year old son wanted to do an electricity experiment involving Fluorescent Light Bulbs (used in a science fair experiment by my 11 year old) and Power Lines. Since we love to learn by inspiration, we took the idea and ran with it.

Near our house, we have three different types of power lines. The first is a residential power line. Next is a more powerful set of lines, followed by lines that are powerful enough to hum (I tried to find information with more specific details about the power lines, but was unsuccessful). My kids thought it would be fun to find out if the myth is true that fluorescent lights would glow underneath power lines. 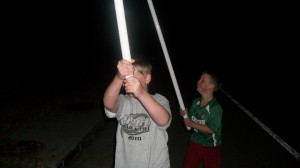 Hypothesis: The light bulbs will glow under the most powerful electric lines, but while under the other power lines.

Procedure: Two scientists (my lovely kids) will each hold a fluorescent light while standing under each type of power lines and observe whether or not they glow at night. The third scientist will attempt to capture the results on camera. The lights will be held under the power lines starting with the least power working up to the lines with the most power.

Results: The lights did not glow under the least or second to the least powerful power lines. The lights glowed under the most powerful electric lines. The higher we held the lights, the brighter they glowed. We also noticed the that the brightest area on the light was where the scientist held the light. If a second scientist, who was holding nothing else, touched the light, we noticed that the light glowed brighter near their hand, too. Also, the entire light glowed brighter when 2 scientist touched the light and nothing else. As we walked back under the other power lines on our way back toward the least powerful line, the lights continued to glow (gradually dimming) until we passed all of the power lines.

Conclusion: This was a successful test to see whether or not fluorescent lights glowed under power lines. We wonder how the weather conditions effected the way the lights glowed, but were unable to capture any usable footage on a digital camcorder or photos without a flash so that we could compare the glow on nights with different weather conditions. We did not collect the temperature, but found that it felt cold and more humid than usual. There was cloud cover, which might have been in the process of turning to fog. Next time we attempt this experiment, we will note the temperature and possibly the humidity level. We will do the experiment on a night with higher humidity and lesser humidity to see if there are any other differences.

In the mean time, I hope you will continue to comment with your Science Fair Experiments & ideas.

note: The pictures in this post were taken with the flash on to show how we held the fluorescent bulb.