Have you ever seen something on a website or a program you are using on your computer that you wanted to use for a school project, to add to an email or blog? I find things all the time that I want to share with others.

One of the best ways I have found is to use the Print Screen Button. Some people have seen that button and wondered what it does. Basically, whatever you see on your screen right now is captured by your computer and placed on the clipboard of your computer, just like when you copy or Control + C text in a text document.

Now, let’s say that my son wanted to write a persuasive essay about “Why I Want the Latest iPad” so that I will get it for him. He would likely include a picture of it. Since he doesn’t already own an iPad- he wouldn’t be writing the essay if he did- he goes to Apple’s site and sees a picture that he wants.

1. He presses the print screen button. The computer would capture a picture similar to this: 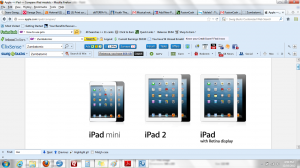 2. He doesn’t want to include the entire picture in his report. So he opens up a picture editor like Paint. Then, he pastes it into the screen by pressing control+v simultaneously or by clicking on the paste icon in the upper left hand corner of the program: 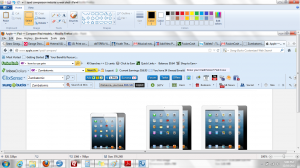 3. Since he only wants a picture of the very best iPad on the left, he will click on the select button, which is highlighted in orange:

4. Then he’ll drag the curser around the picture he wants so it looks like this (note: you sometimes will want to scroll down and/or zoom out to select big objects more easily- I scrolled down):

5. This is the final product after I press the crop button (pointed out in the picture above): 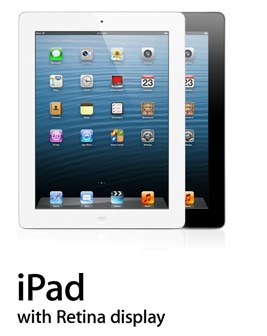 6. The last thing to do is to Save! If you’re new to Paint, here is the picture of the two places to save (they’re circled!):

If you make pictures of one thing after another, make sure to click “save as” so that the previous picture isn’t lost. Then, you’ll be able to enter in a new file name for the new picture you just created.

Now you know how to make pictures of things you find on the internet or the programs you are using to add to emails, facebook, blogs, and more!