This week, my family started reading Little House in the Big Woods by Laura Ingalls Wilder.

So far, it’s a hit. When I say it’s time to stop reading, my kids ask me to read more. Throughout the day, they’ll ask me to read again. It seems this book is a great choice for my family at this time.

The kids asked several questions, so we stopped to do a little research. Here are some of the questions they asked when we got to the chapter entitled Winter Days:

Friday is project day, so we made butter using heavy whipping cream. Then, we made Johnny Cake. I have no interest in making head cheese.

How to Make Butter the old Fashioned Way

We do not own a churn, so I got some of my 1 cup Pampered Chef Prep Bowls, filled them with heavy whipping cream from the store to the 1/4th cup mark, secured the lid and let the kids start shaking.

My 8 and 11 year old sons, Isaac and Jared respectively, had a long enough attention span to shake the cream until it the butter separated from the butter milk. My 4 year old daughter, Cami, and 6 year son, Ethan, gave up after about 5 minutes. Jesse, my 2 year old, shook his for less than a minute before wandering off. I put the younger kids’ projects into a large jar and shook it until it turned into butter.

Once the cream separated into butter solids and butter milk, we picked up the butter solids in our hands and squeezed the remaining buttermilk out of the butter. I explained to them that this allows the butter to last longer in storage. 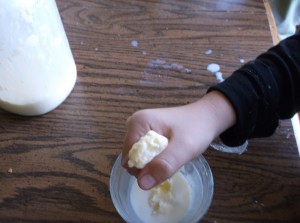 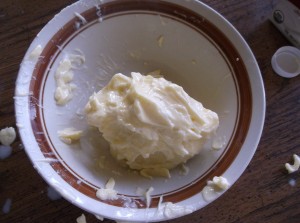 After that, I got a large mixing bowl and a quart of whipping cream. We used a cheap hand-held mixer and made some more butter. The purpose of this was to show the kids how much easier it is to make things today. We also learned that the butter made this way was harder than the butter they made by hand. 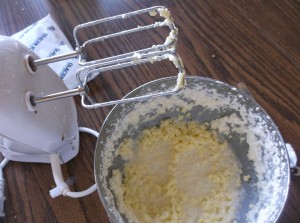 As a part of our discussion, Isaac explained that he learned at his enrichment class last year that people discovered that if the cream was put into a jar, which was tied to a rope attached to their wagons, it would turn to butter because it would bounce around as they drove from place to place.

How to Make Johnny Cakes

Add the cornmeal to the boiling water and cook for 5 minutes. Add the rest of the ingredients. Cook in the oven at 400 for 10 minutes or until lightly browned. Source: Cooks.com

We do not have a pestle, so we used our Wondermill on the coarsest setting to make corn flour from yellow popcorn. So, it probably didn’t turn out quite the same as if I planned ahead and either made or bought cornmeal. 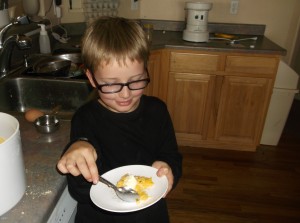 See our other projects in Little House in the Big Woods Part 2.