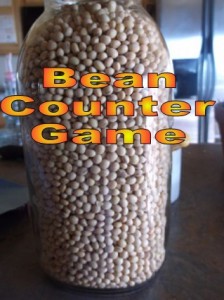 Last night in Family Home Evening, my husband and I introduced the concept of The Bean Counter Game as found in Oliver and Rachel DeMille’s Leadership Education: The Phases of Learning. Note: In the book, the official name of the 5th ingredient is The Bean-Counter Game.

Since yesterday was Labor Day, we spent the day working around the house. The kids were really excited that they already earned a bunch of beans just by doing the things they normally do to keep the house clean.

How The Bean Game Works

When I was preparing to present the game to the kids, I came up with the rules as they applied to our family. The book does a great job explaining how the DeMilles made this game work at their house. Since every family is different, every family will have their own needs and challenges.

We decided that every time our kids studied for a certain length of time (the length depends on the child), completed a responsibility, or used good behavior they would receive a bean. If someone helped another child study or complete a responsibility, such as cleaning the living room, they’d each get a bean because we’re promoting team work. Originally, we wanted to give a bean for each time the living room was clean, but later thought that more would be learned if the kids learned how to get a long while working toward a common goal.

As a family, we discussed ideas for the reward that we’d get as a family when the jar was full. Some of the activities included swimming at a local rec center, skating at a skating rink, going out for ice cream- it had to be dipped because a lot of sweat and learning went into earning it, and laser tag. Brent and I told the kids that these were great ideas, but we needed something that all the members of the family could enjoy. Our 2 and 4 year olds probably wouldn’t enjoy laser tag or skating, so we decided to go for ice cream and get the dipped variety. 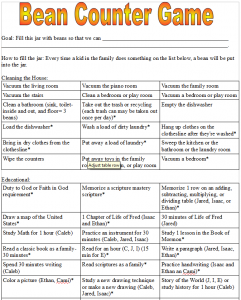 Click on the picture above to see a PDF of our original Bean Counter game agreement.

What Was the Outcome?

I created a list of activity suggestions that would earn beans in case they needed ideas. I later learned that the kids didn’t need the list. They started the day off looking for jobs and studying that they could do. Then, they got a buddy to help them finish the task.

The end result: the kids were excited to set goals, work hard, and achieve. Personal responsibilities such as making beds and cleaning bedrooms were a struggle at our house. Suddenly, they were getting done. While the kids were studying before the game, there was more enthusiasm. Bonus: the kids deep cleaned parts of the house that I never thought to offer as a potential responsibility.

Of course, there were things that needed to be done, such as taking out the trash, that I had to remind them to do. Such responsibilities may seem easier to complete than a family room that was neglected for an entire weekend, but they are also less desirable. Building a desire to work is ongoing throughout life, even when good rewards are the consequence.