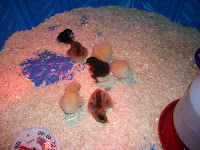 Last fall, we decided to raisebackyard chickens that were two days old and raise them for theireggs. We selected 7 chickens. As a family, we decided to raise themlike pets. Our children held the chickens and played with them fromthe day they came to live with us.
The chicken’s first home, once we gotthem, was in the garage inside a wading pool we bought from a localstore. Our neighbors, who also have chickens, told us that this homewouldn’t last for long. They were spot on. The chicken’s second homewas in a box with tree branch perches by night and by day an old play pen that was no longer suitable for babies to use dueto a hole that was created in the netting. We sewed it up so thechickens couldn’t escape.
Eventually, it was time to finish ourplans for the chicken coop. My husband’s work place manufacturesproducts that have parts that arrive in large crates. He was able tobring home some of the wood from one or more of the crates and made achicken coop. One side was for storing the food so that it would benearby. The other side was where the chickens lived.
We decided it would be good to have achicken run attached to it so that when the chickens were little,they would have a safe place to live. We looked on Craig’s List forused dog and chicken runs. My husband found one made of chain linkfencing that was being sold by a family who was downsizing theirflock of chickens. He had to disassemble it at the seller’s house. Heattached it to the chicken coop he made and applied chicken wireunder the dirt and at the bottom of the chain link fence.

Westarted off letting them wander the yard most of the day once theywere old enough to go outside. However, we had to limit theirfree-range time to when we were outside because our Golden Retriever,Tigger, killed one of the chickens. My kids were devastated that achicken had died. I thought about finding a way to use the deadchicken for food because the dog didn’t mangle the chicken. Itsfeathers were ruffled, but that was about it. I figured that Tiggerbroke its neck and was bringing us his kill the way retrievers werebread to hundreds of years ago.
Whenour chickens were old enough to eat adult chicken food, we decided tofeed them Layena Plus Omega-3.Our chickens have been laying eggs for more than a month. I decidedto test Purena’s claim that their eggs had richer, more golden yolkscompared to eggs without the marigold extract and found that the eggswere more golden.
Weare having fun with our chickens. My kids ask to go outside to playwith the chickens several times a week.
Ourremaining 6 chickens are doing well. Just yesterday, 3/15/12, our 6chickens laid 8 eggs. Today, we paid our neighbor in eggs foraerating our yard. Soon, we hope to sell the eggs we don’t needbecause the chickens produce the eggs faster than we can eat them. Ithink that raising chickens at homewas a wonderful choice for our family.
WouldI recommend raising chickens in your backyard? Yes, but first checkyour neighborhood’s covenants, city and county laws about raisingchickens and erecting a chicken coop.
Recent Posts