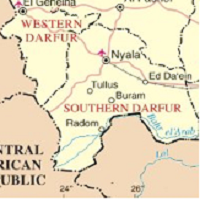 Have you heard about George Clooney and many others who were arrested outside the Sudanese embassy in Washington DC because they wanted EVERYONE to take notice of the Sudanese Government’s campaign to block aid to more than 200,000 people. These people are starving and the UN says that there is a looming famine.

What can we do to help the people who supported South Sudan and went up against the tyrannical Sudanese Government?

I don’t know the best answer, but there are people out there who can help directly. For the rest of us, I suggest we write our congress and encourage them to take action. I don’t normally think that we should get involved in other country’s business. However, when I consider the hundreds of thousands of people who cannot protect, let alone provide food, for themselves, action must be taken.

On the CommonDreams.org site, I found this quote:

“We should not allow the tragedy of Darfur to be repeated. Hundreds of thousands of people died before the international community and United States took action. The question for the people in the Nuba Mountains and Blue Nile is will the U.S. government act now, or will the response be too little, too late,” states United to End Genocide Director of Global Partnerships Niemat Ahmadi who is originally from Darfur, Sudan.

It would be terrible to let so many die when we have the power to protect them.