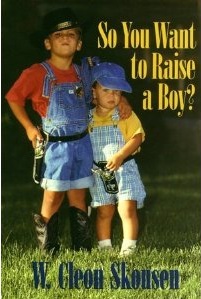 This is one book that I am very fortunate to have. So You Want to Raise a Boy is no longer in print, at least as of the day I’m writing this post. I have five boys and a girl. Since I didn’t grow up as a boy, some of their behaviors baffle me. Plus I am seeing childhood through a different pair of eyes. Naturally, I want to help them to have the best childhood possible. So You Want to Raise a Boy helps me to understand the changes boys go through as well as the characteristics that go along with each age.

This book was written by W. Cleon Skousen back in 1962. While this was a long time ago, the stages boys go through are basically the same even though society, technology, and the latest theories change almost daily.

What makes Skousen an authority on this subject? First of all, he raised 5 boys and 3 girls. They provided him with 50, yes 50, grandchildren.

Professionally, Dr. Skousen was trained by the staff at Gesell Institute of Child Development while he served with the FBI. This led him to write many articles and lecture about youth programs extensively. Later, he was the Chief of Police in Salt Lake City, Utah, he helped found the International Association of Juvenile Officers.

All of that sounds fabulous, but that isn’t what sold me on this book. When I pick up this book, and read a chapter about the age groups my boys are at, the light hearted, yet practical, descriptions of what the boys are going through are so accurate. The sense of humor he used had me laughing and brought me a sigh of relief because I knew that what my sons were doing was only a phase, not a result of bad parenting or a sign that my sons have chosen to go astray. Plus positive changes that go unnoticed were highlighted so that I would remember to celebrate them.

The Beginning of Adolescence: Patterns and Problems of 12 year olds

Skousen wrote a chapter for every stage of a boy’s life from the first year through their 21st birthday. One of my sons is about to turn 12. His recent behavior sent me for a loop. So I decided to pick this book up and read about 11 year olds and 12 year olds.

One of the great things Skousen has to say about 12 year olds is that boys this age tend to develop an interest in younger siblings that are young enough that he doesn’t see them as competition. We have a 5 year old boy that he likes to “mentor” and watch over.

On the flip side, he finds it more challenging to get along with his 10 year old brother. Often, it’s good for them to have space.

Kids this age also need to be reminded as they have in the past. However, instead of getting mad like he used to, he actually thanks me. This is a pleasant change.

Like I said, I also referred to the 11 year old chapter. I’m glad I reviewed this chapter because we’re still experiencing some of the patterns associated with this age. For instance, I feel like I have entered some debate contest.

More importantly, the boys this age do not conform to house rules the way they did previously. In fact, they like to challenge everything adults and peers say in order to prove their status. Skousen recommends that parents allow their boys go through this stage and save the “vigorous discipline [for] only when he becomes completely insufferable” because if he doesn’t go through this stage now, he will go through it later. It is much easier to deal with a boy exerting his independence this way at age 11 than when he is a giant 16 year old.

11 year old boys also tend to be packrats. This is pretty obvious at my house because the box we gave our son to store his special items is over flowing. His dresser is loaded, too. This is normal. As long as I can walk through his room, I let him keep his special things. So his room wouldn’t be acceptable for entry into the Parade of Homes. In the grand scheme of things, this is a minor. I’m saving the arguments for more important matters.

There are special chapters about the challenges and problems that most parents face while raising their sons:

I am very grateful that my friend was clearing out the books she no longer needed and that this book was in that pile. If you can get your hands on So You Want to Raise a Boy, open it up and read it. If you find that it is not for you, or that you no longer need it, you can turn around and sell it because it is still in demand and no longer in print.