I hear parents complain about their kids all the time. Then, it occurred to me today, that I never introduced you to my kids. It’s about time that I tell you who they are and make a list of what excites me about them (this is only scratching the surface). 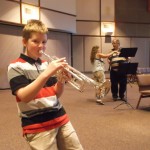 Caleb will be 13 this month. He loves to listen to Louis Armstrong and Lindsey Stirling. He started playing the trumpet when he was 9 and belongs to a homeschool band where the sky is the limit as far as his ability to excel goes. His band directors, Bill Callen and Mark Israel, are his musical mentors.

He is a bookworm, too. It’s hard to peel him away from his books. If I let him, he’d read all day and forget to eat.

Caleb likes watching the videos by the professors in the Great Courses on various topics including astronomy, history, and war.

Following Jared’s lead, he decided to start sewing his own patches on his Boy Scout uniform.

His mentor is someone he hasn’t met in person- yet. He loves watching Chef Brad’s shows because he wants to increase his repertoire of recipes, his techniques, and increase his knowledge of healthy, yet delicious food. His abilities to lead have increased as he has turned the kitchen into his domain. He now delegates the kitchen chores so that he has a clean working space

Jared also loves learning new yo-yo tricks. He is self-taught. He watches the yomega videos that came with his first yo-yo. If he has his yo-yo with him, ask him to show you some of his tricks. I promise that you’ll be amazed.

Jared likes to play piano. He decided to take a break from lessons this summer. We thought that was an indication that he would stop playing or practicing. Instead, the amount of practice time increased. He started site reading songs from the Friend magazine, which is a children’s magazine published by the Church of Jesus Christ of Latter Day Saints.

This summer, he decided to start learning how to sew by hand. His first project was sewing the patches on his scout uniform. His first attempts were raw, but his skills improved significantly over the summer 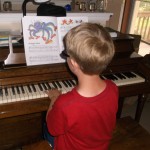 Isaac practicing for his next piano lesson

If there was one thing that Isaac loves, it would be the piano. He plays it throughout the day. And started playing the simplified versions of the LDS primary songs found in the Friend. His piano teacher, Angie Morlan of Prairie Home Piano, is amazing. She is not just a teacher, but a mentor. She loves to let Isaac play what inspires him, even if it’s playing  a song out of order in the book, a song from somewhere else at a level above his skill, etc.

He also loves playing with our youngest two, Cambria and Jesse.

He recently announced that he wants to learn more about swimming. We just found out that a local swimming pool has homeschool lessons for the discounted rate of $25 per month (that’s 10+ when compared to their evening and weekend lessons). 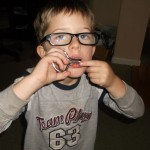 Ethan learning how the play the Jaw Harp

This guy is excited about reading. When we read as a family, he wants to be the first one to read. He is following in Jared’s footsteps because he loves to cook. He is at the point where I tell him the instructions and he does them.

He also loves to learn new things. He recently started learning how to play the Jaw Harp 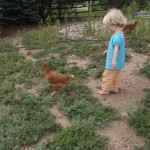 Cambria loves playing with the chickens. We often find her carrying them around while she sings.

Cambria will turn 4 this month. She loves to “read” books, do puzzles, and role play. She loves to cook in the kitchen, too. She walks around the house and finds way she can help.

She loves to get down and dirty, playing with her chickens (they belong to the entire family, but she spends the most time with them), and “cooking” with mud and water. This summer, we spent a lot of time cleaning muddy clothes and shoes.

Academically speaking, she enjoys coloring, wants to know the alphabet, and loves counting to 20. 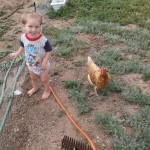 Jesse turns 2 tomorrow. He’s still very young, and there’s so much we still need to learn about this little guy. We know one thing for sure, he is learning compassion. A couple of months ago, he hurt Cambria. When she started to cry, he hugged her and said, “sorry.” This wasn’t one of those quick, get-it-overwith hugs. This was a loving hug.

We find him carrying chickens, jumping on trampolines, climbing ladders, and any other exploratory activity he finds.

When he makes a mess, he starts to clean up.

What are your kids up to? What excites them? Tell me all about it.